ANGÉLIQUE AND ROGER MOUNTED ON THE HIPPOGRIFF (1840)

Antoine-Louis Barye’s masterpiece, of a prestigious provenance and of which only three copies currently exist, is an outstanding artwork.

The centrepiece of a mantelpiece, it originally had two candelabras. According to Barye’s biographers, the model was commissioned around 1840 by the Duc de Montpensier to compete with the magnificent table centrepiece that Barye created for his brother the Duc d’Orléans (partly held in Baltimore, Walters Art Museum).

Beyond its dimensions, the artist, who would have been given complete freedom of design, chose to illustrate a line from a chivalry’s tale most prevalent at this time, from Ludovico Ariosto’s “Rolando Furioso” (Canto X), written in the early 16th century and recently translated into French. The story takes place in the time of Charlemagne and tells the adventures of a beautiful Indian princess brought to France by the knight Roland who eventually escaped her suitors before being unfortunately captured to be fed to a killer whale, a sea monster. The knight Roger, riding his fantastic animal, the hippogriff, then freed her from the rock to which she was chained before she once again escaped to finally find love with Medor, a wounded saracen prince.

This eminently romantic theme (the exaltation of heroic love, the fantastic animal, the knightly epic, the historical context…) was often dealt with during the first half of the 19th century (Delacroix, Doré, Ingres…). However  unlike the latter, who depict Roger plunging his lance into the monster’s mouth to free Angelique, tied to a rock,  Barye chose to capture the moment when Angelique is out of danger, mounted on the hippogriff taking wing above the waves and firmly held by Roger. Such a romantic impulse remains unique in Barye’s work.

The model was edited in two versions, probably contemporary. The differences lie mainly in the position of the hippogriff’s mane and tail and especially its mouth, open in the first version and closed in the second. If the model in both versions is rare in period cast iron, it is particularly so in the 1st version (open mouth), ours, of which merely three copies exist, all numbered and stamped ‘Barye’. The number ‘1’, identified as belonging to the Cohen Gallery in New York, has a slightly different plinth as it incorporates a pendulum cylinder. The number ‘2’ was held in a British collection, Sladmore Gallery, while the number ‘3’, ours, came directly from the collection of the Diéterle family, a dynasty of artists, art collectors and merchants, with whom Barye bound a friendly relationship early on. In fact  it is at the Jardin des Plantes that the friendship between Barye and the Diéterle family began as it was there that the artist met Charles Diéterle, a pupil of Corot, to whom Barye gave advice on painting animals. Little by little the family built up a collection of Barye’s works, of which our sculpture remained a part of until today. As for the numbered copy 4, currently kept at the Metropolitan Museum of Art in New York (10.133.1), it already belongs to the second version as presenting a closed mouth. It thus seems possible to attest that there were no more than three copies of the first version, which makes our sculpture a truly exceptional artwork.

In addition to its rarity, this piece is also remarkable for the originality of its composition as for the perfection of its workmanship. From its inception, the 1844 Barye catalogue presents it as ‘a splendid and truly artistic mantelpiece’. The model is described by some contemporaries as ‘one of the most ingenious inventions of modern art‘ (see Gustave Planche, op. cit. above, on p.167). The formal invention shows  a great erudition translated by the eye of a nature lover.

The composition induces in the viewer the dynamic feeling of flight and frantic running thanks to the hippogriff presented with legs extended  and behind, wings half spread, head stretched out in front.  It is even more impressive in the first version with its open mouth, erect mane and plume-like tail. Associated with this sense of movement is the strength with which Roger holds Angelique, whose unstable position accentuates the ardour of the moment. The power of the whole is softened by the graceful, supple line of Angelique’s body, which is echoed by the undulating tail of the sea creature below the hippogriff, which serves as a base for the group, resulting in a piece that is dynamic, powerful and elegant.

The striking appearance of the composition and meticulous workmanship, thanks to the particularly fine chiselling, Barye’s initial training, brings the sculpture to life. Barye plays on the opposition of materials: the fine work on the horse’s coat creates a play of shadows, further accentuated by the patina, which contrasts with the smooth aspect of Angelique’s skin, on which, on the contrary, the light glides.

The sculptor pays particular attention to details such as Roger’s armour (decoration of the helmet surmounted by a chimera, riveted breastplate, spurs….) or the description of the hippogriff. The fantastic creature is designed in a totally realistic manner from various animals that have been very finely and accurately observed. It has a horse’s body with front legs ending in a bird of prey’s claws, an eagle’s beak, and parrot’s wings, which are faithfully rendered and attached to the animal’s body with the utmost verisimilitude. On the terrace, animated by an octopus among a few waves, stands the sea monster with a snake’s tail and a dolphin’s head, which seems to have been inspired by the Count of Caylus’s collections of antiquities (see Benge, op. cit. above, fig. No 235) or by certain decorative elements of the Italian Renaissance. Imagination is so admirably combined with scientific rigour that it becomes real…

Everything in this sculpture points to its excellence of which Barye was fully aware of, as from the outset he asked a much higher price for this artwork than the for others in his catalogue 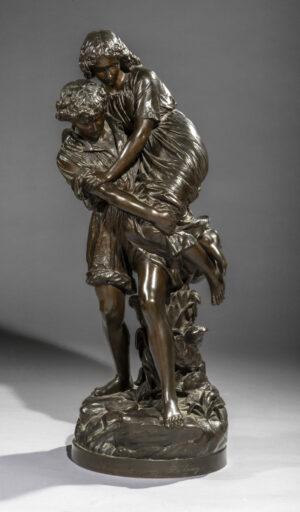 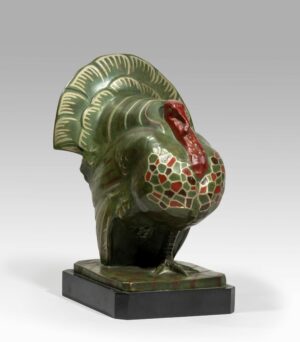 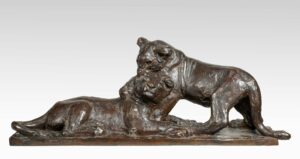 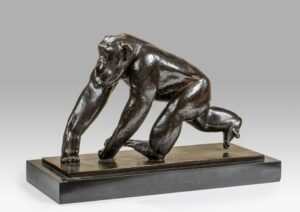 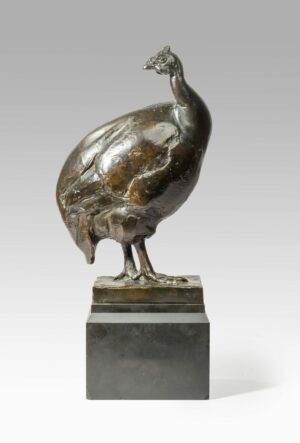