Hilbert learned his craft at the Jardin des Plantes in the presence of animals. The artist made a large number of drawings and sketches, but he above all excelled in direct carving, be it in limestone, granite or marble. His work was fuelled by that in direct carving of the Spanish sculptor Mateo Hernandez (1885-1949), from which he drew inspiration, as well as from clean lines and serene expression of François Pompon’s artworks. Our ‘Cormorant‘, with its relaxed attitude, extracted from a bronze block and imitating stone, appears as a perfect synthesis of his two sources of influence. A single copy in bronze has been inventoried, its cast having been taken from the granite cut.

Hilbert received, amongst others, the1st prize in sculpture awarded by the American foundation Blumenthal, whose aim is to promote French thought and art in the United States. In 1973, he was awarded the Edouard-Marcel Sandoz prize for all his work. His sculptures are displayed (or can be seen) at the Metropolitan Museum of Art of New-York, at the museum of Toledo (Ohio) and at the museum of Denver (Colorado). 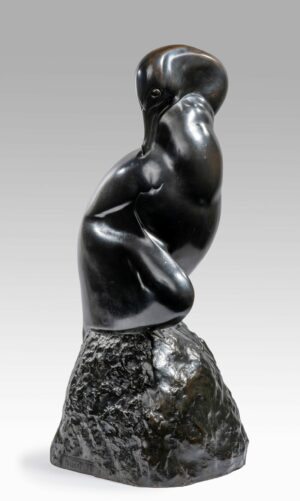