Provenance: Collection Arthur Noël, Paris (acquired from the artist by familial tradition, at the price of 200 francs between September 1870 and January 1871). Handed down by descendants.

The ‘Alsatian orphan‘, sometimes mentioned as the ‘Little Alsation Girl‘ or ‘Young Alsatian girl’, was exhibited for the first time in 1871 in Brussels, that is shortly after Rodin’s arrival in Belgium. The six years of his youth he spent criss- crossing Flanders, with Rose Beuret, so as to study the country’s art or copy its great masters, was a turning point in the artist’s career.

Becoming famous, Rodin looked back on these times as ‘the most wonderful and happiest moments of their life’. Among the thirty or so artworks displayed in fifteen exhibitions, this sculpture was the most successful. The first to have been accepted by a jury (in Gand, 1871), it was to be presented several times in various materials (marble, plaster and terracotta).

Some differences can be seen in the position of the head, more or less buried in the drape of the coat that covers the shoulders, the ornaments of the bow, the sides bordered by a fringe. This representation of a doll-like and melancholic child appealed to the public all the more because its title made it part of the imagery recently born of France losing its eastern provinces. The Alsatian headdress of the bust pays tribute to these annexed provinces. The critics were full of praise: ‘a delightful little Alsatian’ (Gazette de Bruxelles), ‘made from very little, like a pencil sketch, and which many poor devils envy to Charles Buls who acquired it’ (La chronique), ‘exquisite in its naivety and grace with its large silk bow placed on the forehead like a butterfly spreading its wings’ (L’Écho). In a word, ‘it is naivety in grace. The ravishing head of a little girl! ‘ (Exhibited in February 1883, in the salons of ‘l’Art’, place de l’Opéra, on the occasion of the tombola for the flooded people of Alsace-Lorraine, the ‘Alsacian Orphan’ stood out, described as ‘a pretty marble dream’ (Jacques de Biez).

Note the difference between the plaster casts and terracotta versions with the head held high and the marble ones in which the head has been tilted over the shoulder, which increases the sorrowful aspect of the figure. The reference marble is in the Rodin Museum (Height: 15,1″ 38.5 cm). It was offered in 1878 by the sculptor to his faithful doctor and friend, Dr Vivier, to thank him for taking care of Rose Beuret (1). Among the terracotta models, let us mention the ‘Alsatian Orphan‘, version with bent head, terracotta covered with an ochre slip, which formerly belonged to the Taxile Doat collection (1851-1939), sold in 1982; our terracotta is known from family tradition and can be dated between September 1870 and January 1871, when Auguste Rodin was mobilised and working on the fortifications of the city of Paris under siege by the Prussian forces. It has remained in the same family since its acquisition by the great-grandfather of the previous owner ‘a few weeks after the summer of 1870’. 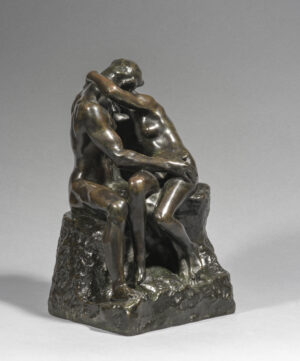 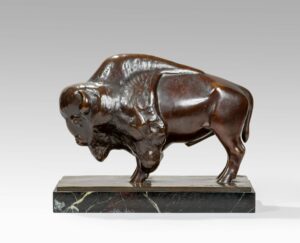 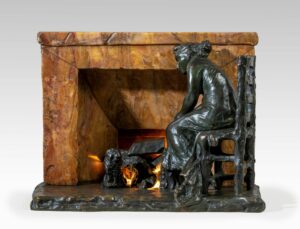 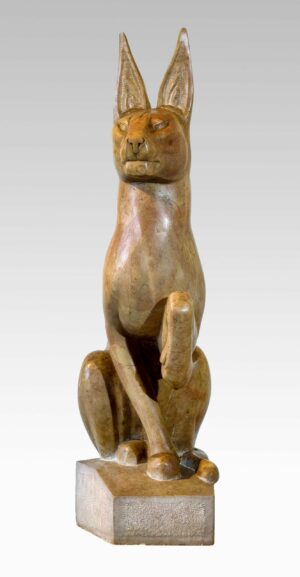 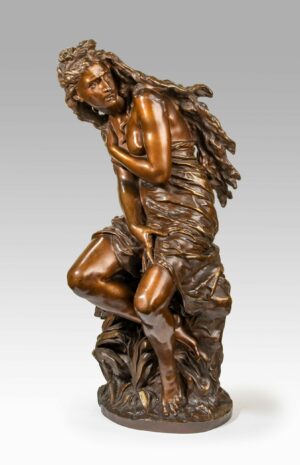