Born in Béjar in the province of Salamanque (Spain), Mateo Hernandez apprenticed as a stonemason alongside his father. He soon became interested in the animal world, demonstrating a great technical mastery. After training in the Beaux-Arts of Madrid he decided to leave for Paris in 1911. He became an animal sculptor by vocation and found his models at the Jardin des Plantes, as well in the studio where he lived, in a vast mansion in Meudon, surrounded by a menagerie.

The artist’s sculptures were made of the hardest and most difficult stones to work: black granite from Belgium, basalt, red porphyry, pink granite from Egypt, green granite, red sandstone of Strasbourg, diorite, schist. He liked marble, softest stone, and exotic wood with a preference for Cuban mahogany and ebony wood from the Congo. With a perfect mastery of all sculptural techniques, Hernandez rough-hewed the outline with a hammer, without reference points. He then worked with a chisel down to the last smallest detail and achieved his sculptures by hand polishing.

His first exhibition in Spain was held in Madrid in 1927. The thirty-seven sculptures, all in direct carving, some of which purchased by the royal family, were a great success.

Mateo Hernandez is a major sculptor whose every work is recognizable by its hieratic aspect and by its sensibility close to that of the artists of Pharaonic Egypt. 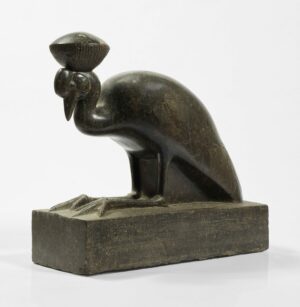